While I wait for MKW and/or Metro Pro to upload some new videos, I thought I’d take some time to look back at the advancements that pro wrestling has made in the People’s Republic of China over this quickly departing summer. This is my first year really paying attention to the Chinese wrestling scene (thanks to a quick Google search I did late last year), and it seems like things have really blown up in that short time.

I know WWE is the big dog, but being from Kansas City, I’ve always been partial to supporting the underdogs. Thus, I’m going to push the WWE-related content to the bottom of this article in favor of flaunting the domestic Chinese indies. If you just want WWE stuff, skip past the first three sections.

Okay, finally, we can get away from the WWE stuff and see what’s actually going on in domestic Chinese wrestling. The Chinese Wrestling Federation, which had a fun little show back in May that I wish I could’ve attended, is gearing up for another one on the day we call Patriot Day in the U.S. (September 11th). In August, they started uploading something like a serialized online show to their YouKu and WeChat accounts. I haven’t actually finished watching every episode yet, but I kind of like the “secret base” setting they use. It’s unique. There isn’t a crowd and they’re all wearing T-shirts over their gear, but I’m assuming that won’t be the case on the 11th. Anyway, aside from getting each wrestler some screen time, these shows seem to be building up to crowning the the first CWF Fighting Spirit Champion (I think that’s what CWF斗魂冠军 translates to), which will happen on the 11th.

Also on the 11th, according to their WeChat, Japanese singer, voice actress, and wrestler Ai Shimizu will be making an appearance. At their May show, the CWF brought in Emi Sakura and Riho to have what was probably the best match on the show, so booking joshi wrestlers might be a recurring thing for them.

The CWF’s website is www.cwf.cn. If you have WeChat, you can follow them by subscribing to cwf2115. And if you can access Youku (China’s version of YouTube), they have their own YouKu channel, which is where I watch their shows. Better brush up on your Chinese, though. I think you can also watch some of their older stuff on this Youtube channel.

China Wrestling Entertainment has been sporadically posting an online show called “Kung Fu Wrestling” (功夫摔跤) this summer. It’s similar to their old show (which I’ve never reviewed here), but now they have a better opening video and most of the matches feature some kind of kung fu-style sequence. It’s creative, so good on them. Unfortunately, I don’t really know anything else that’s going on with them, so this is about all I can write in this section. Sorry, guys.

CWE’s website is www.cwe3.com. They’ve got a Yoku Channel, and they probably still have a WeChat, but I stopped following it because they never update. 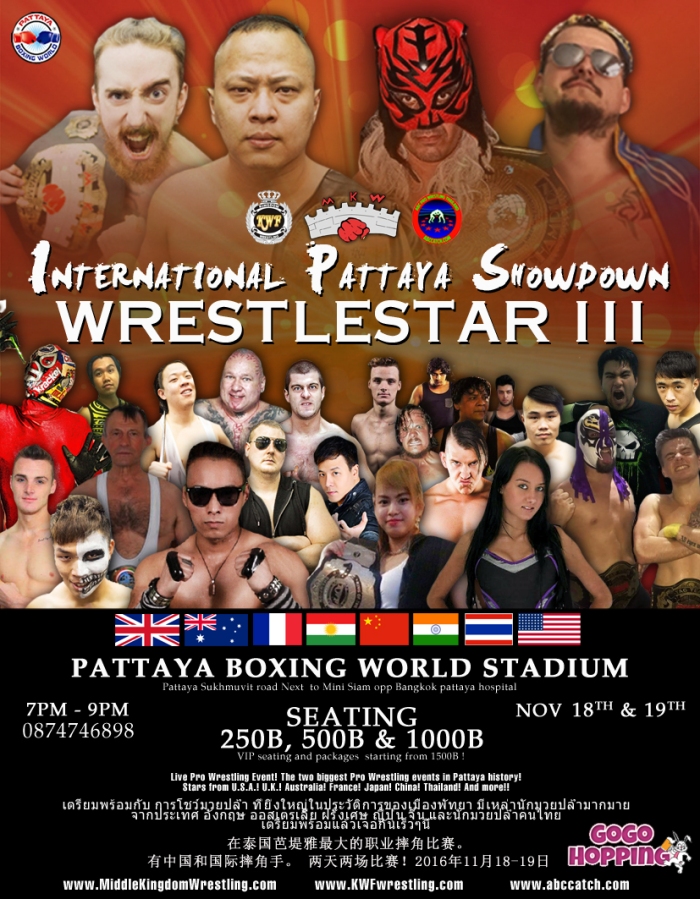 MKW Prepares to Go to Thailand

Last, but not least, Middle Kingdom Wrestling has one more episode of their YouTube show to go in their current season. The most recent episode featured a big trios match that seems to have concluded a certain storyline. Other than that, they’re looking forward to November, when they’ll team up with the Kingdom Wrestling Federation and l’Association Biterroise de Catch to put on a pair of shows in Pattaya, Thailand. KWF is a Thai promotion, and ABC is the French group where Claude Rocca and Tony Trivaldo came from. There’s no card available yet, but if everyone on that poster is going to be there, it’s definitely going to take two shows to hold it all. MKW has a short ad for the show up, as well as a bit where Dalton Bragg isn’t happy about his placement on the poster.

On top of that, MKW has also announced a pair of shows for next year in Shenzhen and Dongguan. In partnership with the APWA, they’ll be bringing in U.S. indy standout Kongo Kong, as well as (believe it or not) the Barbarian and the Warlord, the Powers of Pain!

Now, on to the WWE stuff.

It’s no secret that Vince, Triple H, and Company want themselves a helping of that sweet, sweet RMB that so many of China’s 1.4 billion people have to spend. After their special Shanghai tryout camp last June, Ol’ Jean Paul Levesque publicly signed Anhui Province’s Wang Bin (王彬), a tall guy who’s wrestled for the Inoki Genome Federation in Japan (the promotion that once had a Kurt Angle vs. Brock Lesnar IWGP title match). I’ve seen a little of Wang’s work, and he’s definitely got a ways to go, but we’ll see what the Performance Center (and subsequent booking) can do with him.

Let’s hope they deal better with their Chinese superstar than they have with their Mexican and Hispanic ones.

(Note: There is some evidence that the Shanghai tryouts were really just window dressing and Wang Bin had already been chosen prior to them, which actually seems culturally relevant to the way some things are run in China.)

WWE Live in Shanghai in September

WWE also announced a live event for September 10 at the Mercedez-Benz Arena in Shanghai. It’s looking like Wang Bin will make his debut there against Bo Dallas (link in Chinese). I think it’s supposed to be a Raw-branded show, but John Cena is also scheduled to be there. If you watch Raw and SmackDown live on PPTV, you can see Charlotte, Becky, Sasha Banks, Roman Reigns, Renee Young, etc. pushing it.

WWE and PPTV Hook Up

WWE doesn’t air live on Chinese TV. Old dubbed episodes used to show up on a local channel, but since we don’t have the WWE Network available to us, most fans have to wait a few hours until someone uploads them to one of many online video streaming sites. Or they did until John Cena showed up in Shanghai, speaking (kind of) fluent Chinese to announce that WWE has partnered with streaming site PPTV to broadcast Chinese-dubbed episodes of Raw and SmackDown as they air in the U.S.! The WWE poster boy certainly wowed the crowd (and previously the internet) with his Mandarin skills. Dude certainly has me jealous, as I’ve lived here for five years and don’t yet have the vocabulary he seems to possess.

I must say, it is nice to be able to watch WWE’s flagship shows live again, even if it is in the morning and features Chinese dubbing over everything. Too bad the deal doesn’t also include NXT and the Cruiserweight Classic. Speaking of which…

Hong Kong Wrestlers in the #CWC

WWE’s Cruiserweight Classic tournament has been bringing a lot of previously unheard of international talent into the wrestling public’s eye, and there seems to have been a bit of emphasis placed on one Ho Ho Lun out of Hong Kong (which is technically part of China). He was put over as the founder of Hong Kong wrestling, made it to the second round of the CWC (beating the brother of a former WWE performer), and even after losing to Noam Dar, he still seems to be hanging around backstage at NXT shows. Whether that’s because they plan on using him again or because Wang Bin still needs a translator is yet to be seen, but it can’t hurt his profile.

Meanwhile, Ho’s fellow countryman Jason Lee also got some TV time in the CWC, but he had to go up against Rich Swann in Round 1, so there wasn’t much chance of him advancing, unfortunately. Personally, I’ve become a pretty big fan of Jason Lee, so I kind of wish WWE would’ve signed him for their upcoming cruiserweight division. Could still happen, I guess.

And there you have it. That’s wrestling in China these days; at least, what I can get a handle on. I know there are other groups like New Taiwan Wrestling and Ho Ho Lun’s Hong Kong Wrestling Federation, but I just haven’t gotten as close to them as I have to the others. Also, I’m pretty beat from writing this whole thing. I hope you’ve survived it. Thanks for reading.

This site uses Akismet to reduce spam. Learn how your comment data is processed.