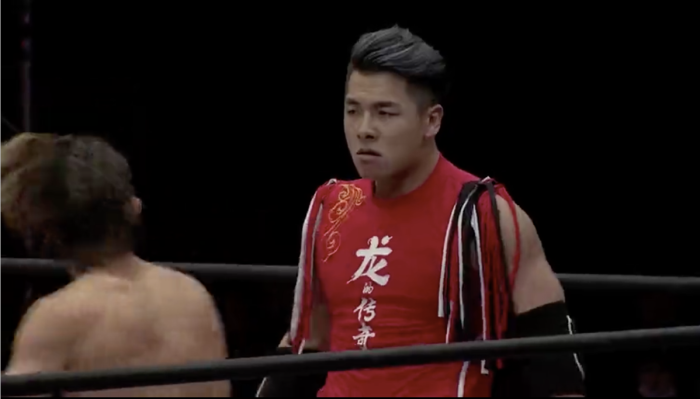 Our Story So Far…
– Read all about Oriental Wrestling Entertainment by scrolling down to the second-to-last segment of this article by NuclearConvoy.
– The OWE roster is split into three teams representing the three letters of the promotion’s acronym. Team members wear generic black, red, or blue gear depending on their assigned team.
– All of the OWE wrestlers were recruited from the Shaolin Temple, so even though they’re mostly debuting on this show, they all have experience in martial arts, live performances, stunt work, etc. They also opened the show with an elaborate dance routine.
– Fan Hewei and Sun Chaoqun are on the W team. Fan’s nickname is “Wild Wolf.” Sun’s is “Tank.”
– Tang Huaqi and Wang Jin are on the O team. Wang’s nickname is “Tiger Tooth.” Tang’s is “Mr. Cool” and is said in English.
Now on to the match!

Fan and Tang don’t spend much time before tagging out. Wang messes with Sun by booting him in the backside and tricking him into kicking the referee. He’s a bit of a scamp. Sun is pissed and follows him out, so Tang and Fan go back at it. Tang really shows the kung fu with his flips and kicks, but a dragon screw turns out to be a good counter. Fan and Sun do some simple double teaming. Wang comes back in but isn’t really a match for the bigger Sun. More kung fu-esque action mixed with a bit of Lucha from Fan and Tang, and then the black team work over Fan’s arm. Fan overpowers Wang, but Wang makes with the flips and fast dropkicks. Sun then chokeslams him to Hades. The red team slams Wang around, then everyone pairs off. Sun is unmoved by Tang and flattens him, but Tang saves Wang from a double team. The black team work together with several stereo kicks and combos on the red team. The highlight reel spot comes when they do synchronized space flying tiger drops. Their cartwheel backflip elbows don’t look quite as good, but their stereo 450 splashes do, and that’s how they win the match.

Afterwards, they help Sun and Fan up, and all four bow to the crowd.

This was a really nice opener. Yes, there was a match and a lot of dancing before it, but this felt like the true introduction to the promotion and its homegrown talent. Plus, it actually had a finish.

I immediately assumed Wang and Tang were the heels when Wang did his tricky stuff, but as the match continued, I got the sense that Wang’s mischievous antics were meant to be endearing and funny. That kind of stuff seems to be very popular in Chinese comedy films and TV shows. Sun and Fan were very aggressive and mean-mugging after it, so I think they were actually supposed to be the unruly ones.

All four guys impressed me. I assume they were all making their professional debuts as wrestlers here, but they looked like they’d been at it for a little while. Having experience in kung fu and stunt work helps, I’m sure. The didn’t do a lot of selling or psychology, but their moves looked much more polished than most debutants I’ve encountered. Their athleticism was undeniable, and it’s crazy to think how impressive they’ll be in a few years if they keep training with CIMA and the Dragon Gate guys.

Tang’s kick combinations were unique. Wang’s personality was the most obvious of the four. Both of them were very precise with their flipping. Sun was an effective power man, and I’m assuming that will be his main role among the whole crew. Fan seemed pretty good all around, with no specific style standing out as his specialty.

I might have liked Wang’s hijinks to continue through more of the match so that it could be a deeper part of the story, but I as solid as everyone was on this first outing, it’s hard for me to entertain my nitpicks.

This site uses Akismet to reduce spam. Learn how your comment data is processed.