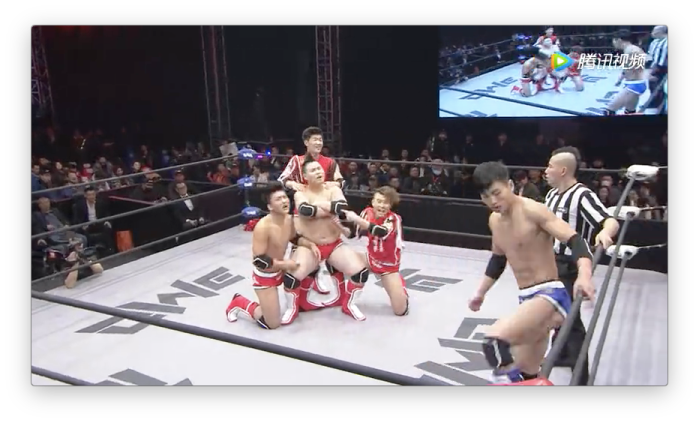 Our Story So Far…
– Read all about Oriental Wrestling Entertainment by scrolling down to the second-to-last segment of this article by NuclearConvoy.
– The OWE roster is split into three teams representing the three letters of the promotion’s acronym. Team members wear generic black, red, or blue gear depending on their assigned team.
– All of the OWE wrestlers were recruited from the Shaolin Temple, so even though they’re mostly debuting on this show, they all have experience in martial arts, live performances, stunt work, etc. They also opened the show with an elaborate dance routine.
– The E team is in red this time. They are “Red Bull” Xiong Zhiyu, “Savage” Ren Yuhang, “Scorpion” Liu Xinxi, and “Teardrop Magic Star” Fan Qiuyang.
– The W team is in blue. They are “Dashing Swordsman” Duan Yingnan, “Warrior” Mao Chenxiang, “Warm-Hearted Oba*” Duan Dihang, and “Little Guan Yu” Zhao Jungjie.
Now on to the match!

Oy, there are a lot of dudes to try to keep up with here, and two of them have the same last name. I apologize in advance for getting anyone mixed up.

Ren and Duan D start with standing grappling, with Duan giving him the slip and gloating about it. Fan and Duan Y mix it up next. They do the shoulder blocks, leapfrogs, and dropkick stuff, and Duan gets the upper hand. The announcers keep insisting that he’s handsome for some reason. Then we get Ren and Mao taking a couple bumps. The powerful Xiong tags in and the whole W team is afraid to engage him. Zhao eventually has a go and gets knocked down and stomped by all of the E team. This leads to everyone coming in and having a little brawl. Duan D gets picked up and dropped by the E team. Liu accidentally kicks Ren when Duan escapes a double team, and then he escapes another to let Zhao come in and take down both guys. Things pick up with a dive from one of the W guys. Everyone’s kind of taking turns coming and and doing stuff now. It all boils down to Duan D taking Ren down with a Russian leg sweep and hooking him in an octopus stretch, which Ren ultimately taps out to.

This match didn’t impress me as much as the previous one. It was slower and pretty short for the number of wrestlers involved. Each wrestler got one brief showing in the ring, and then everyone came it at once, but only a couple of them got to really show off before the finish. None of them really stood out to me except Xiong, and that’s more because of his look than anything he actually did. He was a stocky guy with a doughy physique and a mohawk surrounded by skinny dudes with faces made for teen girl magazine covers.

Basically, everyone looked competent and ring-aware, but no one had time to do anything to separate themselves from the rest except the one guy who looked different. Hopefully, I’ll get to see these guys in regular tags or singles matches soon and find out what each one is really capable of.

*”Oba” is a Chinese word transliterated from the Korean word “oppa.” It literally means “older brother,” but Korean girls use it to refer to their boyfriends…or perhaps pop stars they wish were their boyfriends.